Many grassroots teams are looking to make it big into the League of Legends esports circuits, but to do that they need to recruit the best players available to them.

As someone who has done player recruitment for an esports team, I know the process behind recruiting and what you look for in a player.

In this article, I’ll teach you how to recruit League of Legends players for your esports team, what characteristics do you need to look for to find the best possible options and what to do once you’ve landed a player.

If you want to learn about recruiting players for any game, you can read my general-purpose article called “How to Recruit Players For Your Esports Team“.

Table of Contents show
1 How to Recruit League of Legends Players For an Esports Team
1.1 Steal Aspiring Pros From Professional Esports Teams
1.2 Evaluate the Quality of Low-Watched Streamers
1.3 Scout Grassroots Tournaments
1.4 Leverage the LCS Proving Grounds and Take the 2nd Class Players
1.5 Promote on Your Team Social Media
1.6 Announce Your Objective on League of Legends Communities
2 What to Look For in a League of Legends Player When Scouting and Recruiting
2.1 Are They Skillful?
2.2 Are They Toxic?
2.3 What is Their Mindset Towards the Game?
2.4 Can They Handle Loss?
2.5 Do They Take Ownership For Their Mistakes?
2.6 Would They Work Well With Your Other Players?
3 What Do You Do Once You Recruit a League of Legends Player?

How to Recruit League of Legends Players For an Esports Team

To recruit League of Legends players, you must:

Let me go more in-depth on how you can act on each of these steps to best position yourself on getting esports League of Legends players.

To run any kind of business, you need to be creative. One method that I noticed when working for a professional esports team were all the players publically asking to their the esports team as a pro player.

Obviously, if they don’t go through the proper channels we aren’t likely to recruit them. But you as a new esports team desperately looking for esports players to join your team, that is a gold mine for you.

You’ll see posts that the team made where some players comment like “one day, this will be me” or “how to join team”, those are who you want to reach out to.

Announcing some new creators this week!

Additionally, you can reach out to the people who are making @s at the team and asking to join the team.

Hello @Cloud9, may I join your CoD Warzone team?
just ended in 3rd playing alone against the squads
6 kills, no camping, just killing one by one. Let me know

This method may not work amazingly for League of Legends specifically considering how it’s primarily tier 1 focused and franchised off, but regardless it’s worth a shot and you’ll definitely find some players lying around.

Evaluate the Quality of Low-Watched Streamers

Professional esports teams look at the most-watched streamers and recruit from the top of the barrel. This allows grassroots teams such as yourself to have your pickings from the bottom of the barrel. Going to platforms like Twitch, Facebook and YouTube and evaluate the qualifications of each of the streamers and reach out to those who aren’t affiliated with a team already.

To determine the quality, I recommend reading the 2nd section of this article telling you the things a professional esports team would look for when determining if an esports player is worth signing.

Sadly for League of Legends, many of these players are already in a team. But if you can try to poach those players for your team by selling them on whatever your USP (unique selling proposition) is, that’ll be a great way to land yourself a premade team ready and clearly skillful enough to do well in this grassroots tournament. This is probably one of the best ways to go ahead and pick teams.

You could also look at 1v1 tournaments and try to pull together 5 good players at 1v1 and see how it works. I couldn’t completely recommend it just because who knows how they’d fare in a 5v5 setting, but I wanted to throw that option out there for those who are desperate to find players.

This one is hard for me to speak on behalf of as I’ve never actually seen how the new LCS Proving Grounds work, but it’s now big in esports since 2019 so it only made sense to include it here. You can look at the teams that don’t do so well in the LCS Proving Grounds and try to recruit them for your own team.

This will be hard, especially for the teams that have no capital or sponsorship, but if you are good enough at selling the idea, you have a chance.

Promote on Your Team Social Media

This one is overused and not as valuable, but it is used nonetheless by grassroots esports teams so I’d be remiss not to include it here.

Essentially, go on your personal and team social media to promote that you are looking for players. Unless you already have a decent following, it likely won’t gain any traction or provide any results.

You can also use sites like Hitmarker, eFuse and Reddit (r/esportsjobs) to promote that you are actually looking for esports players to join your LoL team. That all said, it’s going to be hard to actually get players from this because it’s just so overdone and most players aren’t already looking on these platforms for jobs. But again, I’d be remiss to exclude it from this list.

Announce Your Objective on League of Legends Communities

This one is looked down upon, so do it at your own discretion. Basically, you can join League of Legends Discord servers or Reddit pages and promote your team. Most pages will actually ban you for doing that, so again be aware of the rules before you promote anything and try your best not to annoy any admin. Asking before isn’t a bad idea, but if it’s not in the rules, and you ask, they’d likely say no so if you really wanted, you could post it without asking and if they get mad just say “I didn’t know”.

Again, I’m not recommending you do that but like if you were really desperate, you could try. But again, be prepared to get banned from the server or Reddit page because it could happen without warning.

With all the different methods I provided above, you should have a selection greater than 5 and you’ll have to decide which players are the best for you to recruit.

To determine who is best to recruit, you must ask:

Once again, let’s dive right into exactly what each of these means and what you should look for.

Just to provide clarity, you will learn each of these features by watching your social media, streams, videos and during an interview, you conduct with them.

Something I excluded from this list was anything related to content creation. Although I’d argue that’s more important than playing well, especially for a game like League of Legends with any tournaments below tier 1 get no views, you may as well focus on the content creation.

The list below just talks about what to look for if you want players who can seriously win (you’ll have to judge how important that is to your team’s business objectives).

To learn more about how to recruit content creators and what to look for in that aspect, read “How to Recruit Content Creators For Your Esports Team“.

The obvious and one of the most important questions is if they are skillful. That isn’t to say skill is the only element that matters when looking for players, because even some of the best players in the world aren’t recruited by esports teams due to the other reasons I listed below.

But you are damn sure it’s an important one. Unskilled players won’t win, regardless of every other characteristic I mention below.

You can discard most of the Bronze and Silver players. The only exception would be how fast they are improving, but even then you can only wonder when their ceiling will come if they are currently improving from Bronze. It could be as low as high Silver for all you know. I put this on the list as 2nd because this is League of Legends we are talking about. Don’t recruit toxic players.

Do you know why players like Tyler1 haven’t been recruited on an esports team (besides recently but that’s because of his content value). Because of toxicity. There are countless other high-ranking players that teams discard because of the level of toxicity they’d bring to the team.

Basically, you don’t want a toxic player because they will cause issues, cause other players to be toxic and quit the game and just hurt your organization overall.

What is Their Mindset Towards the Game? The same applies to esports and gaming.

Can They Handle Loss?

If they stream, that is a perfect medium to learn if they can handle a loss. Do they get overly emotional and fight with the team?

Or do they look at losses as learning opportunities? I’m not saying they have to be happy with each loss, but they at least need to stay mentally sane and functional after a loss. Obviously, if you are a Faker-level player, that’s an exception to the rule, but even Faker loses and can accept it.

When he lost on the world stage that was a bit different, but I mean when you make it to that level and win that many times, you can let it slide.

Do They Take Ownership For Their Mistakes?

This is the dicotomoy between taking ownership for your mistakes or blaming others for their mistakes. LoL players are notorious for saying things such as “it was my team’s fault”. 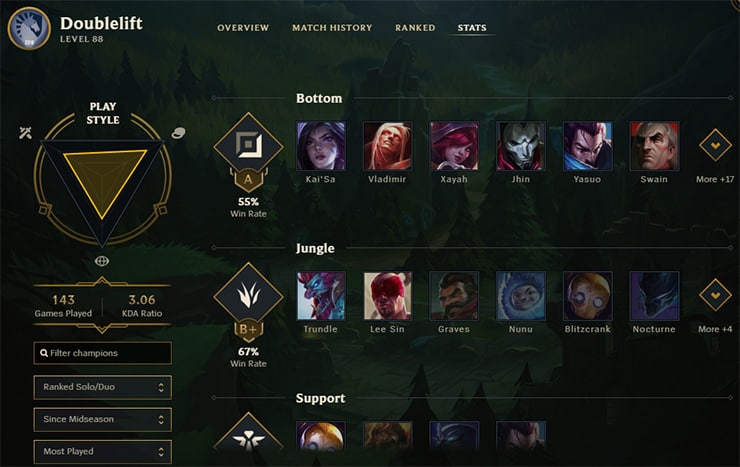 Regardless of if it really was their team’s fault, the most valuable players will be those who always take ownership of their losses and try to see how they can learn from them. An even better player will try to see and learn from his mistakes when he wins and how he can even learn from them as well.

Would They Work Well With Your Other Players? The players need to be able to take the short end of the stick and make sacrifices for the team. That means not taking all the kills, sharing gold that they shouldn’t take and doing whatever he can to win.

What Do You Do Once You Recruit a League of Legends Player?

Once you recruit a League of Legends player, you will want to have them sign a contract with all their benefits and what your team will receive in return. You will want to provide them with all merchandise, branding and product they need for their own accounts and you want to help them transition into the new team.

If they have any requirements, they should be made aware of that and they need to start practicing to succeed in your team and hopefully take your esports team to the next level!